Last August 21-25, 2017, NADA Philippines, in coordination with MiHANDs (Mindanao Humanitarian Action Against Disasters), conducted the 33rd NADA 5-Point Protocol training in Iligan City. The 15 participants are locals of the area, belonging to various Non-Government Organizations (NGOs) and Peoples’ Organizations (POs) and are composed of the Tri-Peoples of Mindanao (Bangsamoro, Lumad, and Christians). For the training, NADA Philippines tapped Acupuncture Detoxification Specialists (ADSes) from various areas in Luzon, e.g. the Cordillera, Nueva Vizcaya, and in Mindanao, e.g. Sarangani, Maguindanao, South Cotabato. The training was conducted in response to the on-going crisis in Marawi City. 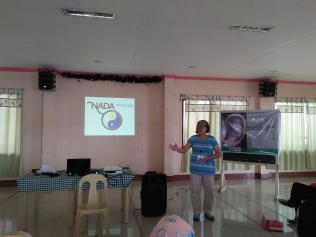 Marawi City contained a population of 201,785 individuals, based on the 2015 census. It is the only highly urbanized city in the Autonomous Region of Muslim Mindanao (ARMM), as well as the only Islamic City in the Philippines. It is the capital of Lanao del Sur, one of the poorest provinces in the country.

On the afternoon of May 23, 2017, Marawi City was under siege as gunmen from the Maute Group and Abu Sayyaf, two local terrorist groups, attempted to take control of the city. Later reports revealed that the attack by the extremists was a reaction of the two groups to the botched operation of the Armed Forces of the Philippines (AFP) to capture Isnilon Hapilon, a leader of the Abu Sayyaf Group, alongside the execution of the Maute group’s pre-planned siege of the city. The terrorist groups burnt the city jail, a local college and St. Mary’s Cathedral. They robbed all the banks, occupied the medical center and other strategic buildings, and blocked the highways. By 10pm of May 23, President Rodrigo Duterte declared Martial Law in the whole Mindanao.

Thousands of Marawi residents have fled the city but an estimated two thousand still remain trapped, unable to leave due to the ongoing attacks and operations. The AFP has continuously launched airstrikes and aerial bombings alongside their combat mobilizations and maneuvers to flush out the terrorist groups. However, these operations have also razed Marawi City to the ground, and even led to the accidental deaths of their own soldiers and civilians.

In Iligan City, there are five declared evacuation sites and 17-23 host barangays for home-based IDPs. One of these barangays is Brgy. Sta. Elena, where NADA Philippines conducted the three-day community clinic from August 23-25, 2017.

More than a hundred days have passed since the start of the Marawi siege with no end in sight, and years of rehabilitation in its hazy future.

The ADSes coming from Luzon travelled by plane from Manila to the Laguindingan Airport in Cagayan de Oro. From the airport, it was a two-hour travel to Iligan City, with one checkpoint near the city. In contrast, the ADS from Sarangani related that it took 15 hours of travel (from the usual 7 hours) to get to Iligan City from her hometown due to the traffic and numerous checkpoints. She counted not less than ten checkpoints, where all occupants of the bus were made to get out for inspection.

During the duration of the training, the NADA Philippines trainers and facilitators stayed at the Diocesan Pastoral Center, Inahan sa Kinabuhi Seminary Compound, Seminary Road, Del Carmen, Iligan City. The board and lodgings were arranged by Fr. James Gascon of the Center for Family Ministry, Ateneo University, and made possible through the efforts of Bishop Elenito Galido, Ms. Fe Salimbangon, and Sr. Emma Concepcion Uy, MSOLTC.

The two-day lecture part of the training was held at the Home for the Aged in Barangay Canaway, while the three-day practicum was held at the Multi-Purpose Hall, Purok 12-G of Bayanihan Village and at the Brgy. Sta. Elena Gymnasium, which has been transformed into an evacuation center.

Some of the Internally Displaced Persons (IDPs) of Marawi City were temporarily relocated at the Bayanihan Village, where they are staying with relatives and friends. Incidentally, Bayanihan Village is also the relocation site for the survivors of Typhoon Sendong, which lashed the area on December 2011. NADA Philippines had also launched a simultaneous training-mission for the typhoon survivors in 2012. The patients treated at the Multi-Purpose Hall were a mix of the home-based IDPs from Marawi City and the Typhoon Sendong survivors. 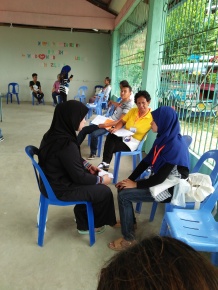 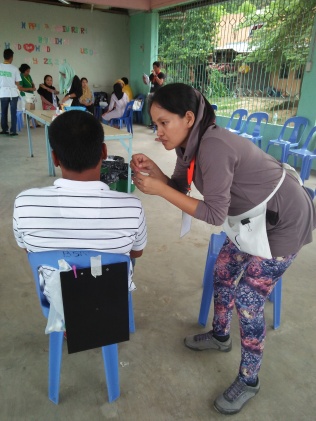 The Brgy. Sta. Elena Gymnasium currently houses 244 families or 1,265 individuals, all IDPs from Marawi City. The number comprises 4.9% of the total number of IDPs in evacuation centers, and 0.23% of the total number of IDPs both home-based and in evacuation centers. The area of the gymnasium is covered from corner to corner with makeshift living spaces, with families crammed in every space available. Due to the arrangements of the place, the NADA Philippines clinicians opted to go to each living quarters to explain the protocol and to inquire if the people there would like to try it. At first there was hesitation among the IDPs but eventually, one by one they opted to try the treatment. The children were especially enthusiastic and would line up to have the magnetic beads applied at the back of their ears. 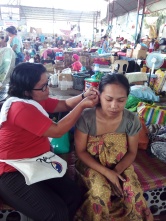 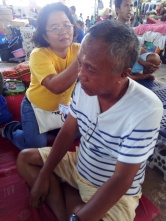 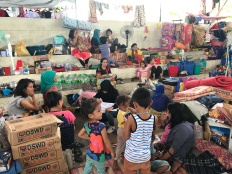 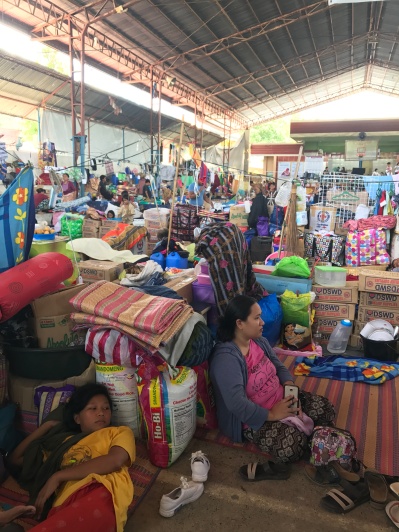 In the three-day community clinic, NADA Philippines clinicians were able to treat a total of 260 patients, 123 at the Multi-Purpose Hall and 137 at the gymnasium-turned-evacuation center. Over 100 children were given magnetic beads in both areas. The most common complaints were bodily aches and pains, headaches, fatigue and stress, and difficulty in sleeping. When the patients came back, the most common feedback from them were the easing of the aches pains, sleepiness and sound sleep, the feelings of lightness and relaxation.

Significant Cases: PTSD among the IDPs

On the first day of the community clinic at the Multi-Purpose Hall, a woman came in to ask about the treatment. One of the ADSes explained the protocol to her and just as they were to begin the treatment, she said she was going to eat first since she had not eaten yet. She left but after an hour or so, she came back. She was assigned to another ADS, who again explained the protocol, and just as they were to start the treatment, she said that she would bring her daughter first so that she can have the treatment as well. She left and then returned with her children, who then agreed to have magnetic beads placed at the back of Shen Men. However, she still did not receive treatment and again left with her children. She came back and left around four more times, and on the last time, she started sharing about her experience during that day when the Marawi siege started.

She said that on the afternoon of May 23, she and her family heard the gunmen of the Maute group telling them all to pack up and leave or else they would be holding arms as well. Many people she knew who stayed ended up dead, and the sons are forced to take arms, and the daughters are married off to the Maute gunmen. She told of how they were all rounded up in the streets surrounded by the gunmen and how they waited until these gunmen walked away before they made their escape. Her family was fortunate enough to get a van in which she, her family, and their relatives escaped from Marawi City. Her family owned a pharmacy in the city but she said she knew there was nothing left because of all the bombing. She said for five days afterwards she could not speak and she felt she was losing her mind. What she held onto to keep her sane was the thought of others before her, others who made it. But she tearfully said, “Nawala ang tulog sa akin (Sleep is lost to me).”

During the reflection at the end of each day, one of the clinicians shared how a patient complained of deafness in one ear ever since the siege started. This patient, a Bangsamoro woman, would also ask the clinician, a Christian, to pray with her as the latter put the needles on the patient’s ear. The clinician summoned what she knew of the prayers of the Bangsamoro people and prayed with the patient during and after.

Many of the patients complained of having difficulty in sleeping. After the treatment, they would say that for the first time in a long time, they felt sleepy. Sleep was coming back to them.

Two of the trainees for 33rd batch of the NADA training are students from Mindanao State University (MSU) in Marawi City, both taking up Islamic Studies specializing in Shariah Law. These two trainees were also in Marawi City when the siege started on May 23, and they are currently living with relatives. One of them has a family in Marantao, a town very close to Marawi, and on the second day of the training, a fire fight broke out there, between the Maute group and civilians. Despite her worry for her family who were still in Marantao at the time, she continued on with the training.

During the practicum, these two trainees alongside the other Maranao trainees were instrumental in convincing the IDPs at the evacuation center to try out ear acupuncture. At the reflection at the end of the day, they shared how much the sight of their Maranao brothers and sisters crammed in the gymnasium touched their hearts and made them realize how fortunate they were that they had relatives and friends to stay with. The experience made them all the more determined, more heartened to do what they can to help.

At the end of the five-day training, NADA Philippines is proud to present the newest batch of Acupuncture Detoxification Specialists: Batch 33. This is the fifth batch of ADSes trained in Mindanao, after the first in Monkayo, the second in Kidapawan, the third in Zamboanga and the fourth in Lake Sebu. These new ADSes will be instrumental in providing ear acupuncture for trauma for the IDPs from the Marawi siege.

A week after the training, the new ADSes joined up with MiHANDs in their relief operations in Brgy. Sta. Elena and at Toril Evacuation Center, both in Iligan City. The ADSes reported that the patients were enthusiastic about the result of the treatments and were asking for follow-up. More missions and community clinics are to be scheduled in coordination with MiHANDs, with the hopes that more people will be treated. 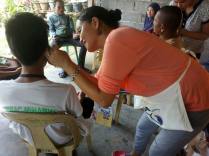 MiHANDs is a humanitarian network created in 2013 during Typhoon Yolanda (Haiyan) with 52  Grassroots Member Organizations and around 1,500 active individual members. They conducted various humanitarian relief operations, human rights and peace education and campaigns. 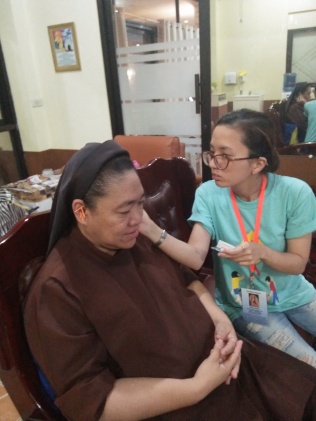 We would like to again appeal for support for the upcoming NADA training for 20 trainees of the Social Action Center and workers in the parish.

We would like to solicit from you any amount you can share to make this training possible this November. We will be needing funds for airfare travel for the trainers, board and lodging and training materials for the participants. The estimated amount is Php250,000.00. For those who would like to extend their help and generosity, kindly deposit your donation to the NADA Philippines BPI Account 308-1117178 and our BDO Dollar Account with the following details:

← NADA US Conference in Delaware
Statement of NADA Philippines on the Passing of Dr. Michael O. Smith →